The new arts organization, From Scratch Performance Company, is more than just another theatrical company. it is a working body of art. It’s repertory holds many actors, singers, dancers, but also those that help them act, sing, and dance.

Their new artistic director is a playwright, for instance. Robert Liebowitz is a 40-year veteran of independent theater. He stand next to experienced choreographers, designers, and Donald H. Sanborn III. Mr. Sanborn explores musical theater, concert music (vocal and instrumental), and Liturgical music within his repertoire. His credentials includes Trinity, an organ solo that originally was composed for his mother and art songs based on existing poetry, including Merry Christmas, which is based on a charming  poem by Louisa May Alcott, dedicated to his children, twins, Sophie and William. He also wrote the book, music, and lyrics for a full-length musical, Robin Hood: How Legends are Made, mixing Old English music, operetta, and the contemporary Broadway sound. Returning to the familiar – literally – his favorite composition is “Jubilate Fanfare.” Written in collaboration with his wife, Jennifer Leach Sanborn, the piece was composed for–and premiered at–their wedding!

We thought we’d get some comments from this renaissance man on the eve of the gala of the opening of another family in his life.

Absolutely! Quite obviously, City Center is one of those places where someone in the arts dreams of getting a performance, but it rarely happens. But what is really exciting is getting performed at City Center with this talented group of colleagues. This is one of the most rewarding collaborations of my professional life. The gala will summarize our mission for audiences, because it will feature excerpts from theatrical works—musicals and non-singing plays; music—vocal and instrumental; and dance. I am grateful to be represented by three works: “Queen of the May,” an ensemble number from my musical Robin Hood: How Legends are Made; and two concert numbers: “Merry Christmas,” and “Trinity.” It is especially satisfying to be able to share works that represent two of my composition interests—musical theatre and concert pieces—with City Center audiences.

What made you form/join this company?

A writing colleague brought it to my attention. I attended several meetings, and each time I found the cosmopolitan aesthetic styles and artistic goals of the other members so compatible with my own.

What make you different from other indie arts companies?

As our mission statement says, “We exist because the members of it wish to bring awe-inspiring, jaw-dropping, thought-provoking works of art to the live entertainment-going public,” and “to tackle the ‘three-headed monster’—the gods of Theater, Music, and Dance—all under the same roof.” How can anyone in the performing arts not want to be a part of that? This has been such a rewarding collaboration.

What are your plans/hopes/dreams for the future?

I look forward to continuing my work as a composer and journalist. I am the theatre reviewer for Town Topics, a Princeton newspaper, and it is rewarding to be able to draw so many productions, of such power and beauty, to audiences’ attention. I also have been grateful for the opportunity to write about the performing arts (and aviation history!) for the newspaper’s sister magazines: Princeton Magazine and Urban Agenda Magazine. I am excited to continue my collaboration with those publications (owned by Witherspoon Media Group). As a composer I am at work on the music for a show that is too early in the writing process to discuss at length, but I will say that it will be a musical, based on a play by Alfred de Musset (1810-1857). I also look forward to continuing to explore the worlds of concert and Liturgical music, particularly for voice.

Starting From Scratch: An Inaugural Gala for a new Performance Company will be on Saturday, September 14, 2019 at 7:00 p.m. at City Center. Tickets will be $25 and available on BrownPaperTickets as of September 1. Refreshments will be served and will be evening attire – with a cutting edge. 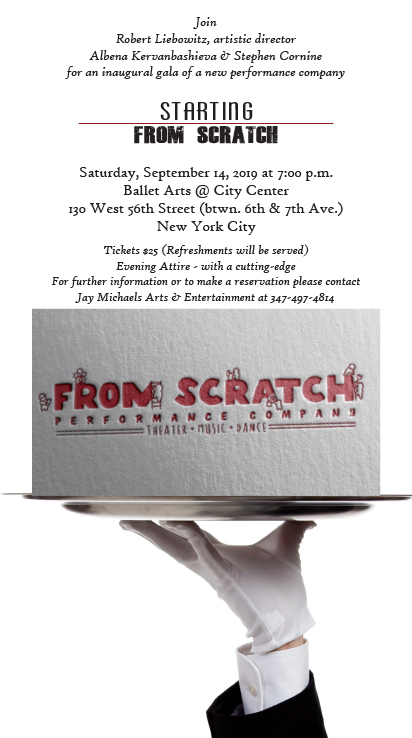